It’s not that I don’t love him. I do. I adore him. He’s got to be one of my very favorite kids! I just wish he would go home.

After hubby went to his physical therapy appointment, he stopped by Stephen’s and helped him get out of bed and brought him to our house. He’s been here ever since. Yessiree, I’ve heard enough of the UFC channel, the dumb cartoon channel [the one with adult satire cartoons like the Simpsons and South Park.] He changed the channel on my Dr. Oz, Oprah, and Bonnie Hunt. But Ghostbuster? You bet. He had to watch that.

I took him to the chiropractor and he learned he’s got a pinched nerve that is causing a muscle to stay contracted. He’s had this identical ailment before, but it manifested itself in his lower back. Darn it. I feel bad for him. I wish I could take it away. I’d like to rub some peppermint oil or Tiger Balm on it — if only he believed those would do any good — but I just want him to do it at his house. 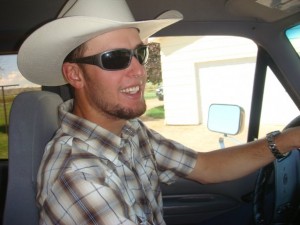 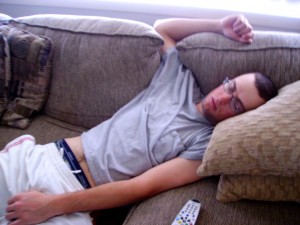 Finally getting a little sleep.

Now, for today. So far, so good. Sim Fast; peaches, banana walnuts and raspberries smothered with vanilla yogurt; salad for lunch. Scrambled eggs in a spinach roll-up for evening meal. Then the hard part. The time between 6 and 9 pm when I roam the kitchen and look for food. I’m going to be conscious of what I’m doing tonight. Maybe put in my plastic mouth piece. Try really hard to not eat an entire brick of low-fat swiss like I did last night. I’m going to ignore the orange-pineapple cake on the cabinet and the chips on the fridge.

I can do this and I plan to be down one pound tomorrow morning . . .