I’m not sure what made her want to compete in a triathlon, but compete she did! It was 29 degrees early in the morning [but warmed up in the afternoon!] I guess that’s why it was called the Ice Breaker!

After the bike race her hands were completely numb, her lips here blue and her teeth were chattering, her hair was nearly frozen [this after the swim and then going out into pretty dang cold weather!] I said, “Wow, you’ve done enough. You can stop if you want to. You are already amazing.” But she wanted to change into a warmer [spelled d.r.y.] shirt and off she ran to finish her mile.

Not long afterwards, I heard over the loud speaker “Keziah Ward! You are awesome; look at her still running strong. Here she comes! Keziah Ward! Give it up for Keziah!” 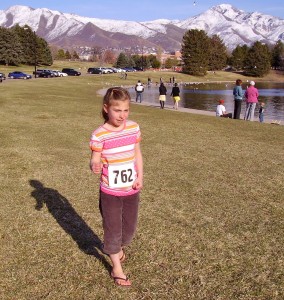