I’d love to say so far, so good, but I’ll say so far, pretty good. I’ve tried to weigh on Tracy’s scale that she [seriously] keeps in the bottom drawer of the bathroom under a tote bag. I’ve weighed everywhere between 139 and 143 each time I stand on the scale one right after the other. To say the least, the scale is inconsistent. I can’t say for sure if any of those numbers were correct, but I’m guessing I’m around 142,  judging from the way my pants and ring fit.

There’s more food here than I want. Monday night Tracy’s friend brought over dinner. It was a pasta dish with pieces of breaded and fried eggplant. It also had diced tomatoes, something green and a divine seasoning I’ve yet to identify. We’ve also had it for left overs several times and it was as delish then as at first. This morning we had homemade strawberry syrup on top of apple whole wheat pancakes. I hurried and ate an apple and orange so that I wouldn’t be tempted to eat four pancakes in a row! So only two. But the really great thing is, I’ve been strong and been able to resist many other temptations that seem to suddenly be in front of me. For instance, the kids went into Great Harvest yesterday when we were in Idaho Falls. I love Great Harvest. Even when I get a slice of [healthy, 5-ingredient] honey whole wheat I know it’s more than I want to eat because they slice off a hunk the size of Rhode Island and then I usually add the real butter and honey. So it’s just better for me to stay out of there. [Last week when I ran to Utah I had a slice and then had a huge raspberry and white chocolate chip scone which set me off for two days.] When we were all starving we toyed with the idea of going to Subway or another far superior sandwich place in Rigby, Gator Jack’s, but instead decided to go home and eat something already there. On the way we stopped at Maverick for a frozen yogurt for Keziah and I somehow was able to walk out of there without one for myself. Yay!

I was just looking for a picture of Jorge’s hydrant exercises for my niece, but found this cool picture instead, of two of my favorite people together. You can’t go wrong listening and living as these two promote. They practice what they preach and are both in fantastic shape and health. 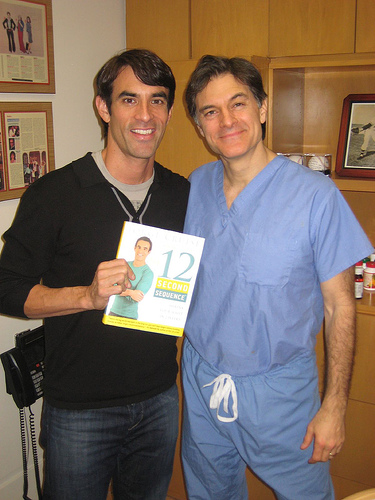 Off to making a display for Tracy’s Baby and Pregnancy Fair. Last night she made four darling rice socks for give-aways and today she has lots of work and finishing touches on brochures and signs. So Fish and Annes and I are heading to Gator Jacks, today, for a turkey and avocado and sprout ensemble. Then off to the movies with the girls — Alice in Wonderland.

Off with her head!