Do you have any idea what it’s like to be me? Any idea at all?

Mikelle bought me some beautiful flowers for my birthday. She must have called the floral shop because she lives in Logan and I live here. So I’m not absolutely clear whether she actually picked them out or what. But they are absolutely gorgeous. I texted her when they came and she pretended she didn’t know anything about them but wanted me to take a picture of them. So I grabbed the camera, cleared off a little table with a green checked cover, positioned them and started snapping sway. None of the pictures turned out. They were fuzzy. But I plugged it into the computer and tried to import. Sure enough. Fuzzy. I then figured out the battery was low. So I ran upstairs to find my trusty camera battery recharger that I had bought for just such an emergency. See, it’s really hubby’s camera because Stephen sold it to him for a measly $50 when I actually offered him $75 for it. And I bought all the gadgets to use with the computer, and this nifty little battery charger that Mikelle recommended. And I bought a big capacity [I don’t really know all the jargon] memory card. So I really feel like the camera should be half mine. Oh, off track. Anyway. I ran upstairs to get the battery charger [ideally with some charged batteries in it?!?] Stay with me, now. Here’s what I’m getting at. Do you have any idea whatsoever what it’s like to be me? I couldn’t find it. I looked in my sock drawer. That seemed like the logical place as soon as I went into the bedroom. It’s the first drawer I noticed because it was slightly ajar. Not there. I checked my undies drawers, my camisole drawer and the jammie drawer. Nothing. I looked in the other bedroom and the china cupboard. [No actual china in there –it’s basically a large and fairly nice junk drawer.] I looked on top of the piano, all the time trying to remember why I would have chosen a specific place for the charger. I always try to associate things together that will later make all the sense in the world to me. No sense coming through though. OK. I retraced my steps and checked all the drawers again. I specifically remembered putting it somewhere in the bedroom because I thought it only logical to put it there. Quick search through the house again, because by now it is getting darker and even if I did find the charger in the next little bit it probably wouldn’t be light enough to take a picture because I don’t know where the flash is anyway, and we don’t have a lot of lighting in this house. Only lamps. Yah. Who would think that someone would build a house with hardly any ceiling lights? Anyway. I thought and thought really hard for a couple of minutes and then all of a sudden [sort of like magic!] I remembered putting it behind the picture of Andie on my tall dresser. Sure enough there it was. So I hurried into the living room where there was barely enough light to take a picture. But nothing was happening. I turned on the camera but nothing. OK. Clearly I needed to charge these batteries too. [It’s a four battery charger.] So I plugged it in and waited ten minutes and tried to put them in the camera but when I was removing the ones already in the camera I noticed the batteries were both heading the same direction, not opposite like they are supposed to be. What the heck. I wasted all this time just because the batteries were in the camera wrong. So no light. No picture. Just the fuzzy one I took in the first place and now all I can wonder is if you really understand at all what it’s like to be me. 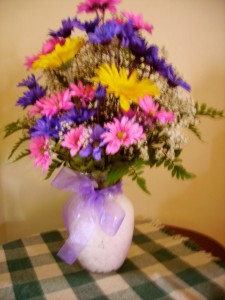 Yah, pretty fuzzy. But so beautiful! Thank you Mikelle and Logan!

I know that’s a long paragraph but that’s just how I typed it  . . . very fast without taking even one breath.