Poor daisy, our faithful and long-time friend has been in an accident. She’s not appreciating her cast and broken pelvis. Poor thing. When she ‘walks’ she hobbles on her right front and left back leg, as the other two are quite useless. She holds them off the ground at odd angles.

Steevo and hubby were on their way to set up hunting camp and were going about 50 on a dirt road when Daisy slid off the box in the back of the truck and skidded in gravel for thirty feet. Stephen called us at Bear Lake almost bawling to tell us the bad news. He drove clear back to Lyman — a 200-mile round trip — to the vet and worried about his pet for the rest of the weekend.

Blythe gave Daisy to Stephen when his first dog, Slingshot, got shot by a farmer eleven years ago. Blythe had just gotten Daisy and her niece, Tess, from a neighbor in Rigby. She was three years old and felt so heart-broken for Steev that they drove all the way here and presented him with her pet. Dais has been a family favorite ever since. Each time the grandkids visit, Daisy rolls on her back, exposing her girl parts and insists on a rub or a scratch. She’s been gentle when they were all babies and she’s been a devoted watch dog for years. 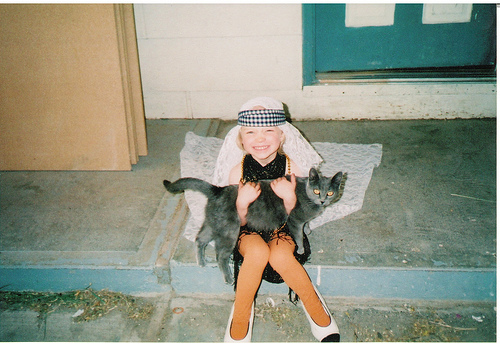 Yes, yes, I know this is Blythe with Spike, not Daisy. But it shows how much
she truely loves her pets. So giving Daisy to Steevo was hard for her. 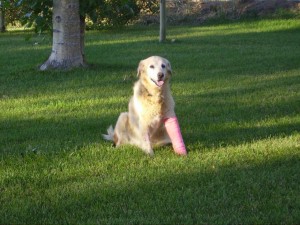 Just last night there was a skunk in the garage eating Daisy’s dog food — just chopping away while Daisy sat about three feet away in her fluorescent-pink cast barking her fool-head off. Obviously the uninvited skunk had evaluated the situation and knew she wasn’t much of a threat. I crawled out of bed to quiet the barking, discovered the skunk, hurled my broom at it and then hurried to shut the garage door. I still said, “Good, dog” to her, even though she couldn’t manage to get rid of the intruding skunk on her own.

Today she posed for pictures and looked at me, like, “Surely you’re not going to blog about this!” [If I had a nickel for every time I’ve heard that lately . . .] But I told her of course I was going to. She’s part of the family and needs to have an explanation why she is hurt.

It’s what moms do. They write about their families, even when the going’s rough. Nienie does it, CJane does it, Kerflop does it, Wetoatmeal Kisses does it, and I do it. It’s the new journal/family scrap book all wrapped into one. And one day she will thank me for preserving this moment in time. 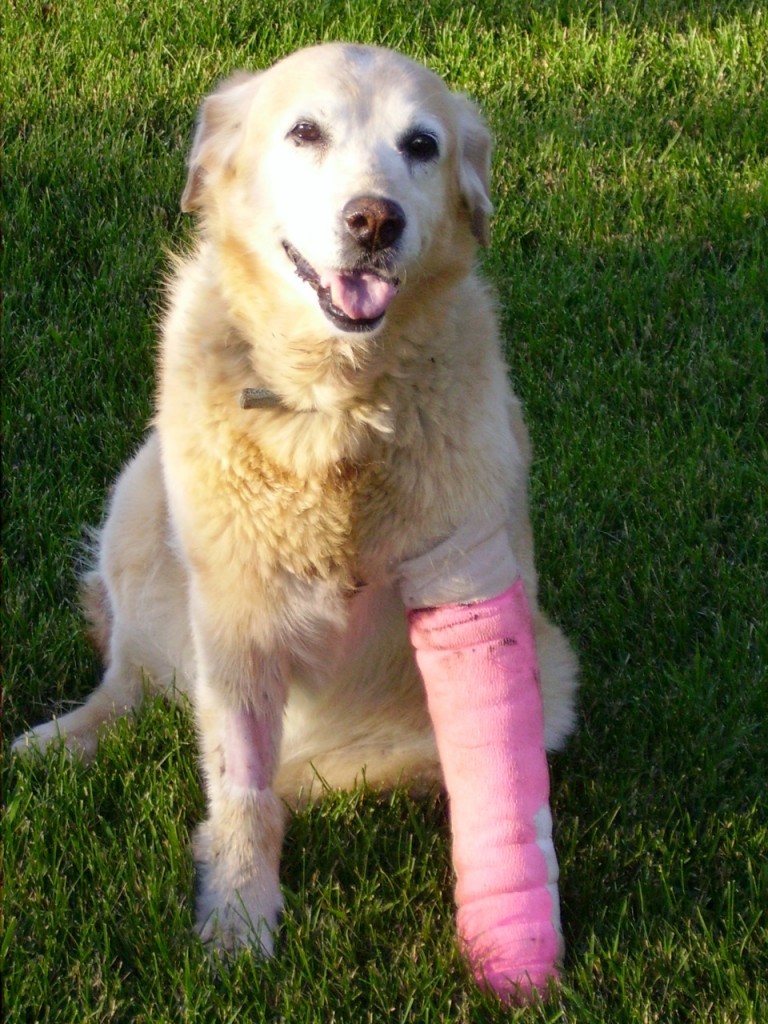 One thought on “dais”