Have you heard the news? There’s another new baby in our family. Yes. Little almost-three-year-old Annes has given birth to a new little guy and she takes him everywhere with her. Today he actually went to gymnastics and stayed with the whole group during their warm-ups. Later he laid on the big blue gymnastics rug and watched as Annes and her little friends moved around the course and did their mastery work. Annesley wanted her mama to hold the baby during the class but she really was a very busy gym leader who had to help the other children through their tucks and rolls and pikes.

Yes, she called me yesterday and explained that she had had a little boy. He sleeps with her, she nurses him and she loves him so much. Annesley even told me that he sits in her car seat with the seat belt around him so he is safe.

His name is Easton.

I’m not totally positive, but I assume that her Easton is named after Mikelle and Logan’s Easton. 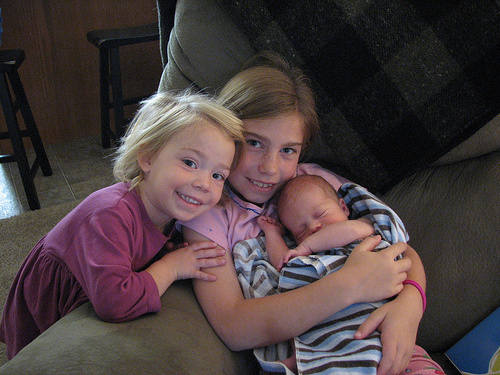 She also asked if I had a baby and when I told her no she promised she would bring me one the next time she came for a visit.

I’m telling you this little girl is full of it!

One thought on “yet another baby”