Add to that the stress of negotiations at work — financial planning meetings for the upcoming year; a flood in the PAC [Performing Arts Center] Monday morning when I came to work; not enough sleep; more workplace stress concerning refinishing the gym floor this summer; interviews for summer help.

My neck has been hurting for at least a month. I can feel it popping and it’s stiff and tender. I’m tired of going to the chiropractor. My right foot feels like I tore something in the heel and around the ankle. I’ve gained some of my hard-fought weight loss pounds.

Then there was Mother’s Day. Not my favorite day of the year. I feel pretty darn incompetent in the mother roll.

I went to the temple last week and prayed and prayed. On the way home I said, “I’m ready for a prompting. I’m ready for inspiration.” And as I drove along, listening to BM commentaries, I eventually felt a nudge to stop at Taggert’s and get a dessert. They have amazing confections and I know L loves them. That was seriously the only prompting I had. I thought what the heck, I just got through saying I was ready for inspiration . . . so I stopped.

When I got home, I sat it on the cabinet and noticed a couple of hours later that it was gone. Not a word. Not a hey, thanks for thinking of me. Notta a notta. And I was frustrated. Really kind of hurt. But then I thought, I can’t deny that it was a prompting. I can’t deny that that was the only thing that came to me. So I let it go. I didn’t try to second guess and I refused to be bitter or dismayed.

And a couple of days later, I actually saw fruits from my efforts. So what the hay. And then I remembered this quote from a couple of weeks ago.

Kindness is a language which the deaf can hear and the blind can see.

and I remembered this quote from Elder Holland: 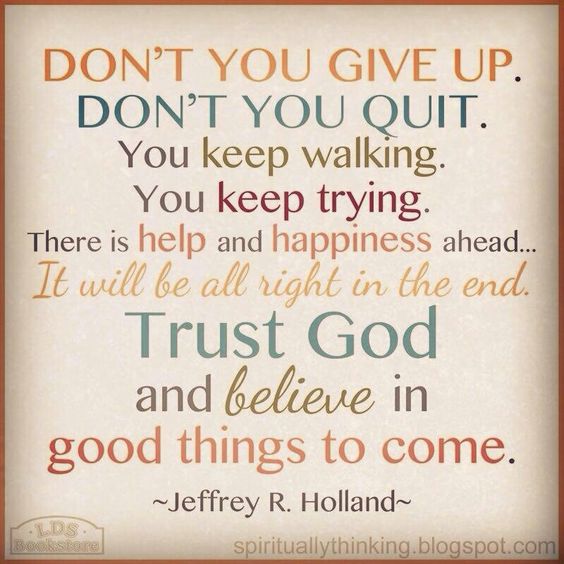 The tests of life are tailored for our own best interests, and all will face the burdens best suited to their own mortal experience. In the end we will realize that God is merciful as well as just and that all the rules are fair. We can be reassured that our challenges will be the ones we needed and conquering them will bring blessings we could have received in no other way.

So here I am . . . trying to have faith, trying to get through each day, and trying to get over. Someday I hope to look back on this and know it was the right thing to do.